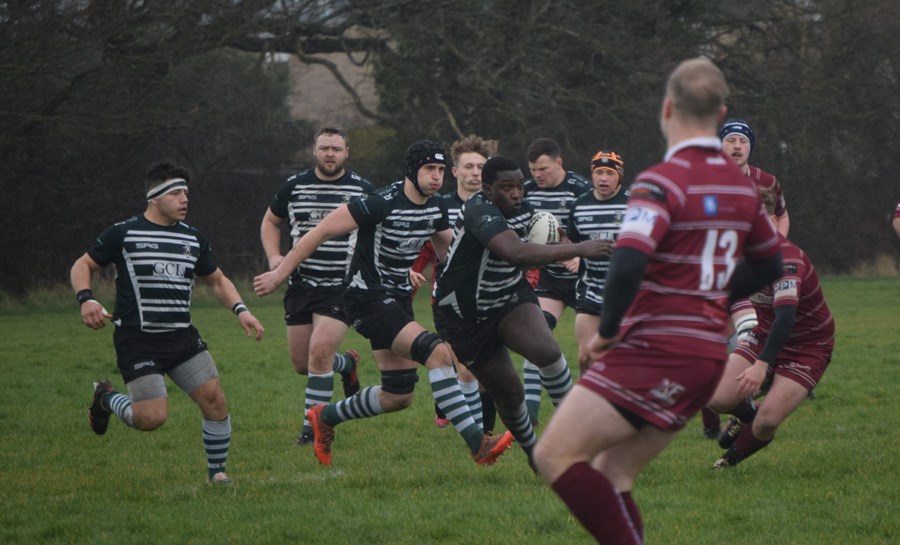 Hendon Youngsters once again “Step up to the Mark”

In this top of the league encounter, Hendon found themselves without key regulars giving their students the opportunity to compete.

That opportunity came after 10 mins when Captain and Full back Will Theaker broke from defence running up the left hand slope to the Hitchin 10 metre line with a well-timed pass to left winger Charlie Scarr to outpace the opposition for a corner flag try, converted by stand off Jack Ryan, 7-0. Hitchin with the slope in their favour came back at Hendon from the restart, pinning the home side inside their 22. From an attacking scrum, the Hitchin scrum half broke down the blind side to put his winger through to score a converted try to level the score at 7-7. The next 15 mins were crucial for Hendon to resist the driving mauls and set pieces of Hitchin, the League leaders and favourites to win, especially with their heavier pack. The Hendon defence was superb with the whole team excelling until the 25th minute when Ryan slotted the ball up-field with pack leader Mike Culhane winning the turnover and setting up a maul; the next passage of play was text book from the training ground  as scrum half Dobby Wildman passed to Robby Burrell to Theaker on the right flank  resulting in a another ruck with Wildman then to the left flank passing to Scarr with fellow student Josh Lowes securing to score in the corner 12-7. Into the closing mins of the period, it was the home outfit in possession as Hitchin were penalised on their 10 and Ryan went for a long wind assisted kick to convert and Hendon were ahead 15-7 in still, a very competitive match.

Into the 2nd half with Hendon now facing into the strong gusty wind giving the visitors the advantage. But carries by Nick Andrews and Nick Pope along with Dave Jenkins for front row performance soon caused problems with Hitchin conceding a penalty that Ryan slotted over to go 18-7 up. Midway through the half and another opportunity to Hendon as Scarr was bundled into touch on the corner flag about to score after another backline move from returning scrum half Billy Burrell to his brother Robby again to Billy to Theaker to Scarr ending in being defended out by Hitchin. Hitchin resolve was still strong as Hendon defended with Andres Romero excelling;  then came warnings of technical offences which resulted in yellow cards and in the last minutes Hendon were reduced to 13 players allowing a breakaway from the Hitchin 10 to score an easy converted try to give Hitchin a flattering bonus point at 18-14 with Hendon taking the lead over Hitchin with 4 league points. Concluding Hendon Captain Theaker congratulated the whole team especially the Students who had all contributed to this double success over Hitchin for the season.

This Saturday Hendon are away at St. Albans with both Clubs still in contention for final League positions.