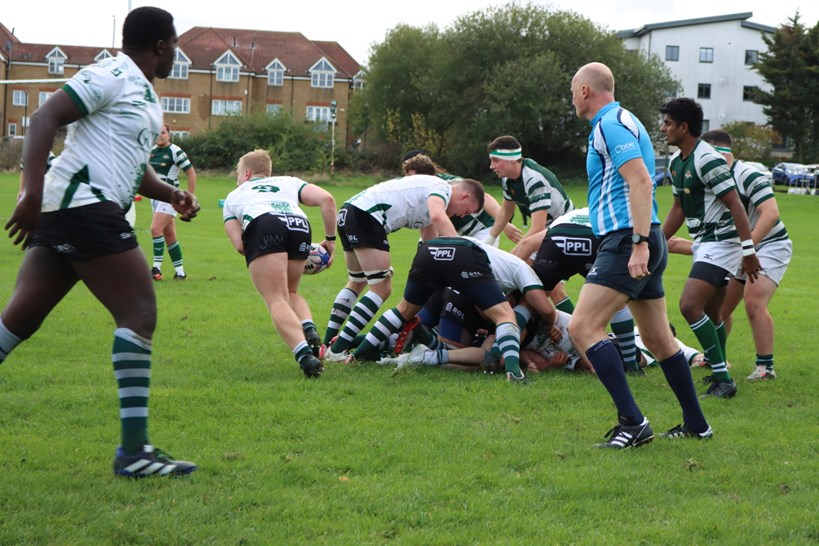 Hendon, fielding a XV made up with an equal number of regular 1st and 2nd team players, put the home outfit under pressure for the first 10 minutes with excellent scrummaging and forward mauls which were all stopped short.

From an attacking error the Scots then showed their backline strength with a break through the Hendon defence to score to go ahead 7-0 after 15 minutes. Jack Ryan’s long kicks pushed Hendon back into the Scots 22 but again their faster backline scored an opportunist try for a 14-0 lead on 25 minutes.

Then a disappointment for the visitors as Hendon’s James Yuille, who was dominating the line-outs, was side-lined with a shoulder injury depleting Hendon’s forward power. Two more tries followed by the Scots taking them to a 26-0 lead before Chris Kiyingi collected in defence to feed Rossa Dooley to break through and run from 10 to 22 but again was stopped short.

Into the second period Hendon were still very positive in attempting to climb back but further home scores gave Scottish a 36-0 lead from mid field breaks.

Then Hendon were given some encouragement following a Ryan tap kick over the home defence, to set up a forward maul lead by Hadi Al-Bassam with scrum half Richard Roberts switching blind and winger Craig Carroll scoring in the corner a Ryan converted try 36-7.

Then further problems as Hendon were down to 14 for repeated penalties giving the Scots more advantage to score two more tries at 46-7.

Hendon did not give in with perhaps the best try of the game. JT Moncher with a fine mid-field burst set up a maul allowing Roberts  to take the narrow side to Moncher with Harvey Brown beating two defenders to score with Ryan converting 46-14. Then with the last play the Scots finished off with a final score to win 53-14.

DoR Phil Smith said "once again our strength in depth has been tested but I cannot fault any of the players on this performance. Scoring two well set up tries and never giving up made me extremely proud. This extended run of games without a break is proving very difficult with injuries mounting and next week we face old rivals Saracens Amateurs who are flying high this season."

Hendon 1st XV are at home at Copthall in the League against Saracens Amateurs; kick off is 1430 in a match sponsored by former player, captain, coach and now Hon Life VP John Casalaspro.