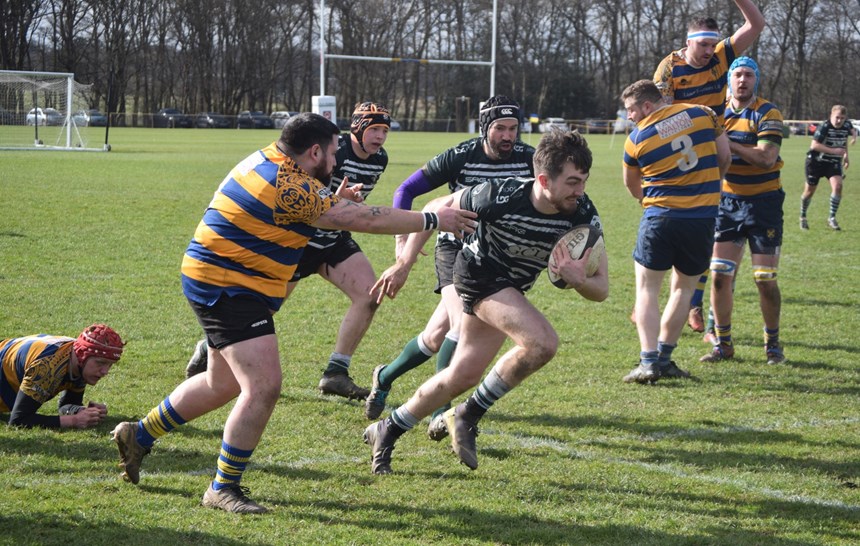 Hendon 1st XV secure a valuable match point in this narrow loss and drop to second in the League with one match remaining.

Captain Will Theaker, who led by example was full of compliments “once again we had illness and non-availability depleting the team resulting in four second team and Vets' players joining the squad at short notice; added to this two lads played out of position but every player put in a full shift and to their credit, although falling short at the final whistle, I cannot fault the squad having given 100% effort.”

The match commenced with St. Albans soon getting the territorial advantage on a very sticky pitch but Hendon defending held good for 15 minutes until the away outfit were offside in their 22 with St Albans kicking the penalty to go ahead 3-0.

From the Hendon restart, carries from Nick Andrews and Chris Kiyingi kept play within the St Albans' half until conceding a penalty allowed Hendon fullback Jack Ryan to kick the conversion to level the score 3-3 on 20 minutes.

The following restart put Hendon back under pressure with superb defending by Andres Yousif-Romero and fellow back row Vets' player Jamie Connolly giving scrum half Will "Dobby" Wildman the opportunity to open up several Hendon attacks. On the half hour, Hendon conceded another penalty allowing the home side to go ahead 6-3. Then as  half time approached Wildman fed a long pass to Will Theaker who sprinted clear to the St.Albans' 22 metre line passing inside to Robby Burrell returning to Theaker to finish off with the first try of the game for Hendon to hold the turnaround score at 6 points to 8.

Into the second period with neither team getting the upper hand with further excellent passages of play from Hendon’s No 8 Conor Bowler and fly half Rob Casey breaking the St Albans' defence without being able to score until midway through the period when a defensive lapse allowed a blindside move by the St Albans' scrum half to break through the Hendon defence to score St. Alban’s only converted try 13-8.

The last 15 minutes however belonged to the away side as Hendon grabbed the initiative allowing Ryan to convert a long penalty 13-11. Hendon’s Man of the Match Jamie Connolly gathered break down ball to set up a final scoring chance but a long penalty attempt went wide. This left a valiant under strength side having almost pulled off a surprise result only to finish with a consolation single match bonus point. At the top of the table there are now six Clubs separated only by three points, and all have the prospect of being the League Champion.

This Saturday Hendon First XV do not have a League fixture with the last match in the League away to new League Leaders Finchley on Saturday April 2nd.

Whilst the First XV just missed out on a win the 2nd XV also playing at St Albans fought out a win by 17 points to 12 points in their Herts Middlesex Merit Table Three fixture.