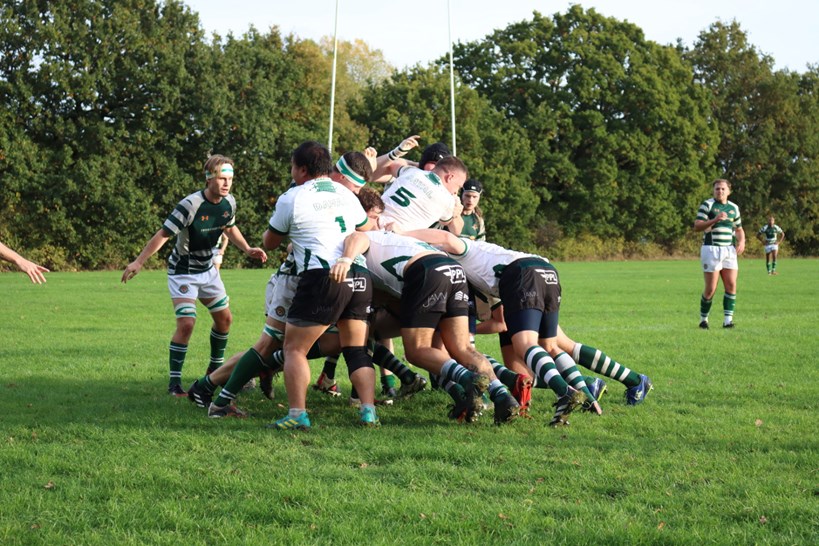 Hendon “Brothers in Law to be” clinch mid table match and Jack Ryan keeps the family name in the Hendon headlines with a try and his kicking.

Hendon were on the scoresheet after 3 minutes with a try out wide by Ross Williams following a line out and maul which came from a Cian Hynes penalty to touch up the field 5-0.

Following the restart St Albans' heavier forwards set up a maul in Hendon’s 22 to push over for a converted try and go 5-7 ahead.

The marker was down for both teams with the away outfit reliant on their bulk with Hendon looking to run the ball wide.

Hendon then conceded a number of mid field penalties putting them under pressure by St Albans to score another push over try to take the score to 5-12 on 20 minutes.

However, Hendon returned immediately with several back line moves creating a gap in the St Albans'defence, allowing Hendon’s Rossa Dooley to crash over for the try with Hynes converting to level the scores at 12-12. Then with minutes to half time another St Albans' maul in the Hendon 22 saw their forwards break the Hendon defence to go into the break ahead at 12-19.

At the start of the 2nd period and Hendon were into St Albans' territory with another cross field run set up by scrum half Richard Roberts finding Hynes to take the blind side with full back Jack Ryan finishing the move for the try with Hynes converting to push Hendon back into the narrow lead at 20-19.

The next score would be crucial and the home outfit got the honours after David Jenkins carried to mid-field with Dooley in support to be stopped short only for 2nd row Hadi Al-Bassam to collect and crash through the opposition defence to score with Hynes converting  to take the score to 27- 19 after 10 minutes.

With the match still in the balance after 20 minutes Hendon pushed down the field with a scrum on the 22 giving scrum half Roberts the opportunity with a dummy pass allowing him to run in an individual try and Hendon increased their lead to 32-19.

A lapse in the Hendon defence again gave St Albans the opportunity for a forwards try to claw back to 32-26 with the match once again in the balance going into the last quarter, Next over in the left corner was winger Jack McIlroy who collected a cross field kick to touch down but the try was dis-allowed after the tackle pushed him into touch. St Albans then conceded another penalty, kicked long by Ryan and from the resulting line out Jenkins broke clear to set up a team effort with John McCarthy in the back line with the full back to beat only to pass to Dooley, his future brother in law, to score his second try with Ryan converting giving Hendon a two score cushion 39-26 with 5 minutes of play time remaining.

St Albans were not finished however and  responded with a break from the Hendon 10 allowing an opportunist unconverted try and the visitors were back in with a shout at 39-31.

The last word was with Hendon, as Al-Bassam was high tackled just short of the line, denying a scoring opportunity and therefore resulting in a penalty try rewarding Hendon with the win at 46-31 and move to 5th in the League.

The Annual John Ryan memorial match resumed its place in Hendon's calendar taking  place on the 2nd team pitch. There was a really strong turnout from John's friends and former team members together with some of Hendon's younger Vets. The match was won by the Hendon team  in this friendly encounter against an UCS Old Boys XV before they moved on to the bar and to supporting the 1st XV.

Jackie Ryan, John's widow was delighted that so many people came to the club he captained for so many years and to support his memory whilst raising money for what is now such an important Charity for the rugby community.