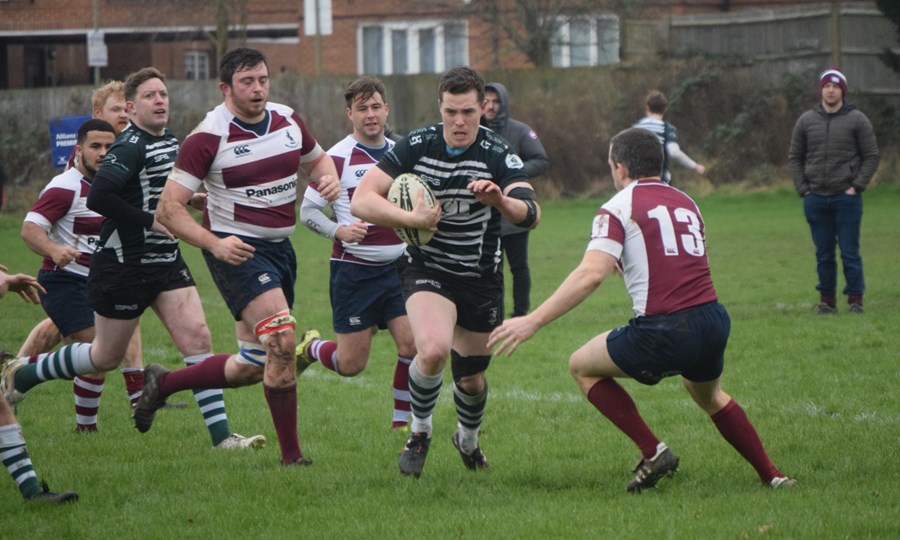 Hendon come back from behind to win in the second half.

For 15 minutes in the first period it was Welwyn’s heavier forwards taking the game to the home side who defended well to stop all phases of play. Then play opened up with prop forward Luke Pollard breaking through from the Hendon 10 into the Welwyn 22 but this was defended out. Further individual breaks came from scrum half Will "Dobby" Wildman, flanker Rossa Dooley and Captain Cian Hynes but the Welwyn defence managed the Hendon attacks until the 25th minute when once again the away outfit returned to the Hendon 22. Great defence with centre Robby Burrell excelling stopping an almost certain try with Hynes kicking to touch allowed Welwyn to set up another backline move this time creating the overlap to score an unconverted try in the corner 0-5.

From the restart the visitors were caught offside and Hynes slotted over a penalty to take the score to 3-5. Again from the restart, Hendon charged into attack with Chris Kiyingi on the front foot but was challenged with a high tackle and Hynes converted the penalty to put Hendon into the lead after 37 minutes. Hendon were then penalised in defence with the visitors kicking the long penalty to retake the lead 6-8. From the restart forwards' leader Mike Culhane collected and drove through with Welwyn conceding a penalty but the kick from out wide failed on half time.

Into the second period it was Welwyn on the attack deep into Hendon territory until Hynes kicked long to touch. From the 10 metre line out, won by Dooley, Wildman then ran through the Welwyn defence into the visitors 22 who again were penalised. Hynes took a quick tap penalty to Kiyingi to brush aside two defenders to score a Hynes converted try and Hendon were ahead again after 10 minutes at 13-8.

For the next 20 minutes neither team could take control in this tight match played between the two teams at 2nd and 3rd in the League. Eventually on the half hour Hendon claimed a strategic advantage and were camped inside the Welwyn red zone. From a line out 2nd row Jake Dunne won the ball and drove to the line but was stopped. After several more attempts Wildman passed long to Hynes to run at the defence before passing to Burrell on the burst to break through to score a crucial match winning try converted by Hynes 20-8.

Hendon Coach, Phil Smith,  was full of praise for the team commenting “The lads had to contend with injuries during the match but to a man kept up the pressure to win this hard fought game against a very well drilled Welwyn outfit. This Saturday we are away to improving Tabard in this very competitive League that underlines the importance of our weekly training sessions at Saracens Stone X Stadium”.

Hendon started very brightly dominating a large chunk of possession which eventually led to a well worked try involving forwards and backs with a nicely timed pass to put Marco Eracleous through a gap to score under the posts with Fazlan Faiz making the conversion.

Unfortunately this ended Hendon’s dominance with Hertford coming straight back from the kick off using their heavier pack to turn the ball over and then score out wide 7-5. Again after a turnover ball and two quick passes Hertford broke away to score out wide 7-10.

Hertford forwards were really starting to dominate at the breakdown and scrumsand all this resulted in another push upfield and despite desperate defence from Hendon Hertford scored under the posts 7-17.

A rare sortie into the Hertford half led to a penalty which was kicked into the 22 and from the resulting lineout and a couple of phases saw captain Aidan 'Soppy' Power crash over the line to score bringing it back to 12 points to 17.

After a series of penalties from the scrum Hertford moved into Hendon’s 22 and scored a well worked try as half time approached. 12-24

With a tiring Hendon now playing uphill Hertford pressed home their weight advantage and made Hendon defend for long periods scoring twice in the process 12-34.
However, indiscipline from Hertford gave Hendon a descent field position from which they made the most of their rare opportunity with Marco managing to break a tackle and score under the posts Faz converted for the extra 2 points  and the score moved to 19-34

However, Hertford again came back strong again scoring another try and just keeping Hendon far enough away so as not to pressure them. A final flurry saw Harry Charles score out wide to give Hendon a bonus point on his return to the team. Hertford finished off the game with the last kick for a penalty taking the final score to 24 points to 42 points.

Hendon's captain commented "A hard fought game today but I am gutted we couldn’t find a way to combat the weight of Hertford forwards. Some great stuff was played by the boys at times today and It’s fantastic to see Harry back in a Hendon shirt and welcome to Adam from Middlesex Uni who played his first game for Hendon."

Mike Head the 2nd team coach said: "That was a really tough game today against a big well organised Hertford team. We just got overpowered at times which restricted our backs from making the impact I had hoped they would have made. A really tough day for the forwards who battled heroically all game right up until the end. It would be great to see a lot more of the lads at training so that we can iron out any problems and build on the good bits from the game. We take away a try bonus point so not all doom and gloom."