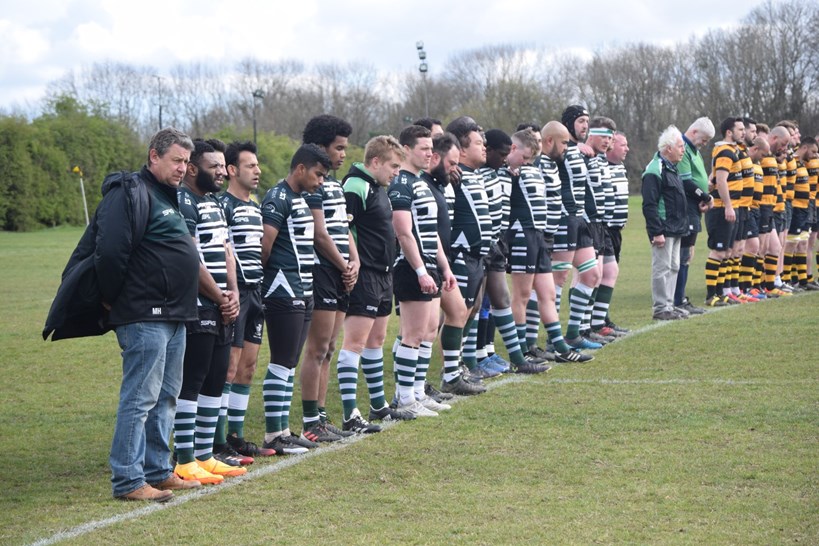 Hendon 1st XV, having concluded their League season turned out in force to join the really good support for the 2nds playing away against Tring.  After a hard fought match Hendon 2nds were complimented by League leaders Tring, who were crowned Champions with the final kick of the match.

The Tring forwards set the early pace from the start camping in the Hendon 22, although defending well the visitors were finally overwhelmed by the heavier well drilled Tring forwards who broke through the defensive line to score a converted try 7-0.  With wind and slope against them the visitors were again on the defence before Tring drove over a further score to go 12-0 ahead after 15 minutes.

Hendon from the restart then rallied attacking the Tring defence with JP Cremin at scrum half finding winger Josh Lowes to set up an attacking run across the pitch only to be tackled into touch on the corner flag. Captain Aidan Power was then held up into touch.

From the Tring Line-out 2nd row James Hibbard ripped the ball from a defender who was held up by an offside Tring defender; Cremin took a quick tap penalty to Cosmos Mutuma to crash through the defence to score and Hendon were on the score-board at 12-5 going into the half-time whistle.

A team talk to push the ball wide in the second period soon paid dividends; shortly after the restart Hendon pack drove the ball from the half way line to inside the Tring 22 but the backline move was forced into touch. However, Mutuma collected the Tring throw for Chris Towndrow at speed to score with full back Faslan Faiz converting to draw level at 12-12.

Hendon were now on top as another backline move was run from the Hendon 22 with winger Peceli Qaniuci setting the pace to the Tring 10 meter line to Lowes then Qaniuci scoring for Faiz to convert and Hendon were deservedly ahead 12-17 after 20 minutes of the second half.

Now it was Tring's turn to get back into play with their forwards keeping the ball tight forcing Hendon into sustained defence which was eventually broken by Tring to score a converted try to again even up with 5 minutes remaining 17-17.

Hendon from the restart were awarded a long penalty kick which went just wide; with time running out and a drawn game looking inevitable, However, Hendon were caught offside on their 10 meter line allowing the home outfit a long attempt to win the match, which to their credit paid off as the ball sailed through the uprights for the win and Champions title.